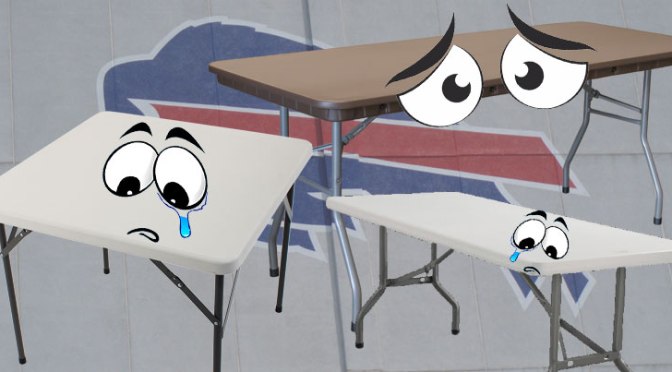 The Folding Table community of Western NY says the Buffalo Bills first playoff game in 17 years will surely mean the deaths of several of their friends, coworkers, and even miniature folding table children.

“We haven’t been this afraid since the Great Table Purge of 1999 which you humans remember as the WWE TLC match between The Dudley and The Hardy Boyz. We lost so many great Tables that day” said Table McTableface while sobbing.

It is no secret that Buffalo Bills fans hate two things, the New England Patriots, and Folding Tables. “Every Sunday at New Era Field our family members are used to support kegs and trays of wings and than are violently sacrificed” McTableface recounts with terror in her eyes.

“I watched in horror last week as a young table, maybe only 3 months old, had it’s spine broken by a man elbow dropping the poor child after jumping from the roof of his automobile.”

The folding table community plans to reach out to the local Beer Can Tribe to form an alliance against the Bills Mafia since this once proud race of aluminum cans are also continuously assaulted at Bills tailgates as well.

“A man stabbed my brother in his groin, popped his top, and proceeded to suck the life out of him in less than 2 seconds. I believe you monsters call this process ‘Shotgunning’ and it’s actually the quickest death we can hope for” says Blue Light Can #12081429087.  “Sometimes I see perfectly healthy cans being crushed against forheads until they explode. WHAT IS WRONG WITH YOU HUMANS!”