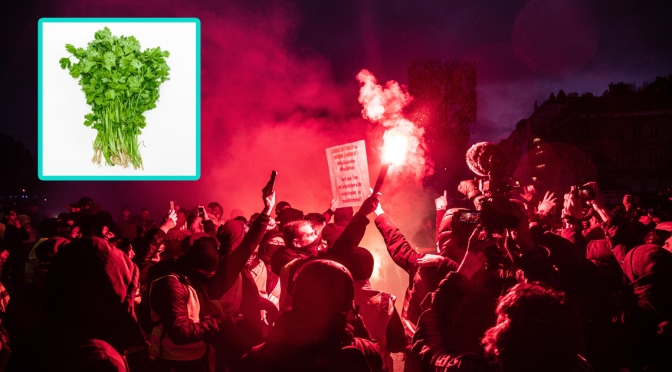 Rochester, NY – The Rochester Public Market is in disarray after a post-Cinco de Mayo Cilantro shortage leads to a riot and subsequent looting at the most recent Food Truck Rodeo event. A large number of businesses were impacted by the shortage, including several trucks and a nearby cocktail bar. When asked if the cocktail bar was putting Cilantro in drinks, a passerby simply rolled his eyes and nodded.

The fighting was compared by eyewitnesses to the Purge series of films, specifically the second and fourth films in the series because I haven’t seen the other two. While there was only one death, a man who was executed for suggesting Basil as an alternative to the violence, a few food trucks were tipped over by the rioting mobs, as were several Port-O-Pottys that had been housing market goers hiding from the chaos.

Richard Nixon themed Country Western cover band “The Whiskey Dicks” said that most of their equipment was destroyed, lead signer William B Saxy doesn’t know if they’ll play at the Public Market anymore, “Yeah it’s just not worth it, and all that really leaves us for gigs is retirement parties for cops. It’s a sad state of affairs, all over something that tastes like soap.”

It is unknown if the Food Truck Rodeo will resume in the coming weeks, or if the greater Rochester area should anticipate the fallout from the Cilantro shortage. In the meantime, market-goers are encouraged to wear protective armor, such as padding from sports like football and baseball only modified to look more bad ass, and carry baseball bats and such like in the film The Warriors. At least from what I remember, it’s been awhile since I’ve seen it.